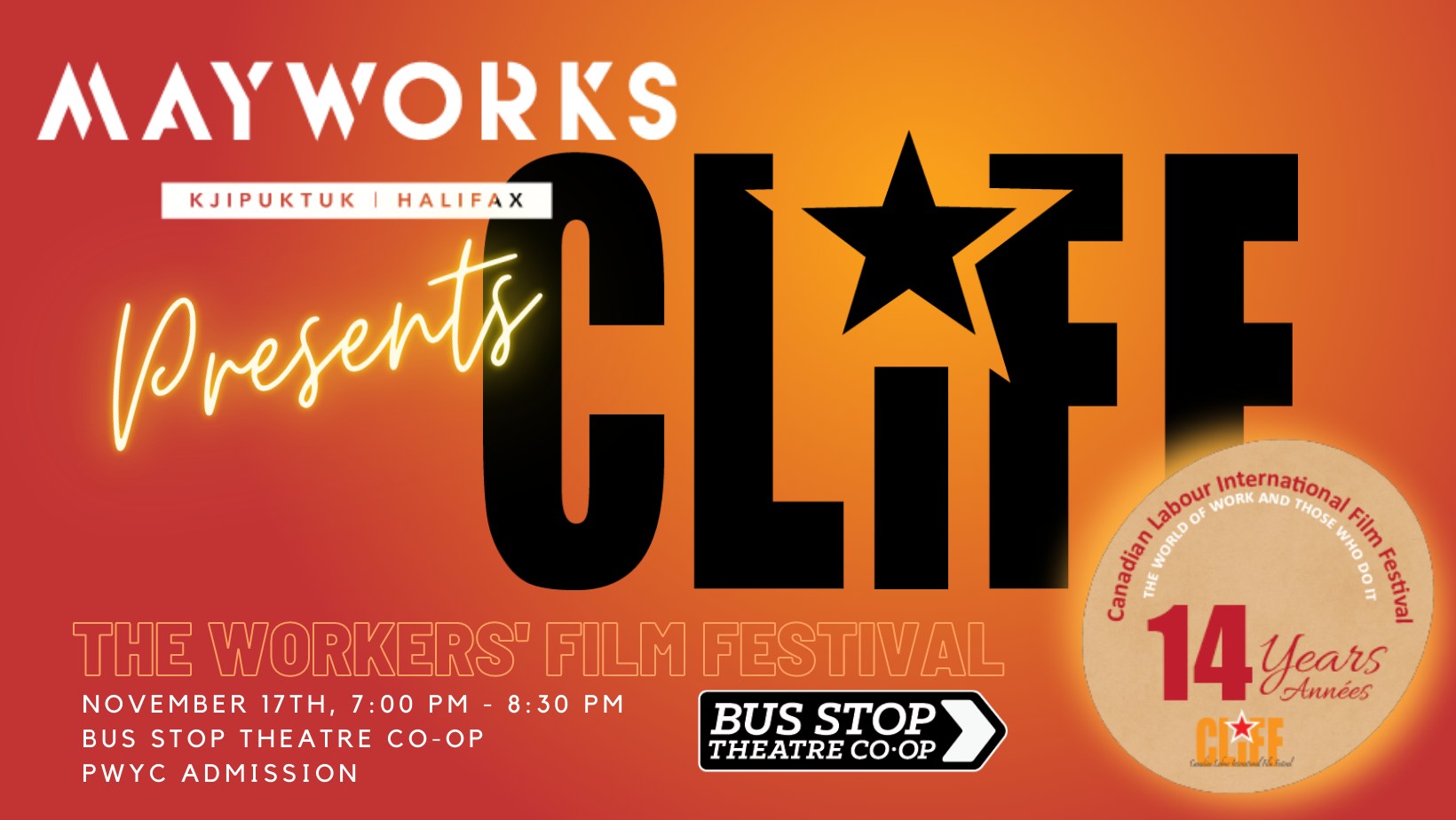 Mayworks Kjipuktuk/Halifax Festival of Working People in the Arts is proud to partner once again with the Canadian Labour International Film Festival for a satellite screening of films from their 16th annual festival. The screening takes place November 17, 2022, at the Bus Stop Theatre Co-op.

This year we are screening If There is No Struggle (United States) by Jared Katriane, See Us Come Together (Philippines) by Alyssa Suico, What Will I Show You? (Canada) by Elie-John Joseph, Opera Trans*formed (Canada) by Leah Borts-Kuperman & Maria Sarrouh, The Unmaking of Medical Inadmissibility (Canada) by Laura Bisaillon, & Kellys (Spain) by Javier Fesser. The screening lasts 62 minutes.

If There is No Struggle (United States) by Jared Katriane
A young woman discovers the working class history of her neighbourhood through the lens of a 1965 Canon Scoopic 16mm camera and historical figures via Boston’s public art. She begins an important conversation that needs to continue in the labour movement given the overwhelming right wing ideology and misinformation being spread targeting working class folks.
The film title comes from an 1857 Frederick Douglass speech: “If there is no struggle, there is no progress. Those who profess to favor freedom, and yet depreciate agitation, are men who want crops without plowing up the ground. They want rain without thunder and lightning. They want the ocean without the awful roar of its many waters. This struggle may be a moral one; or it may be a physical one; or it may be both moral and physical; but it must be a struggle. Power concedes nothing without a demand. It never did and it never will.”

See Us Come Together (Philippines) by Alyssa Suico
See Us Come Together is an amateur documentary following the members of the Optodev Workers Union, tracing their story of forming their union before and during the COVID-19 pandemic.
When factories were forced to close operations due to the COVID-19 pandemic in 2020, an ophthalmic lens workers’ union ensured mechanisms to protect their workers, with the ultimate goal of changing the culture of labour in their factory. The documentary brings to focus what is essential to keep a country running in times of crisis. While the pandemic turned the spotlight on essential and frontline workers, what was essential to the workers of Optodev was their union.
Subtitled in ENGLISH

What Will I Show You? (Canada) by Elie-John Joseph
In the tradition of direct cinema, What Will I Show You is an intimate documentary in which a grandfather and his grandson discuss the past and future of Innu culture. An important, first-person film telling the stories of Innu and their culture, their work, and the immediate impacts of environmental degradation on their lands.
Themes of Indigenous learning, work and way of life. From the Innu nation and residing in the Tiohtià:ke territory since 2006, Elie-John Joseph has been passionate about cinema since a young age. Self-taught, he has been practising film photography for several years.

Opera Trans*formed (Canada) by Leah Borts-Kuperman & Maria Sarrouh
“If I wasn’t an opera singer, would I be a trans man?” asks Teiya Kasahara, a gender non-binary singer, partway through the film. It’s a dilemma facing gender non-binary and trans singers working in a field whose roles are rigidly defined along gender lines: sopranos and mezzos are cast as women (so-called “trouser roles” aside); tenors and basses as men.
Teiya Kasahara (they/them) leads a new generation of trans* opera performers, activists and self-proclaimed “shit-disturbers” making their voices heard–whether the classical music world likes it or not.

The Unmaking of Medical Inadmissibility (Canada) by Laura Bisaillon
Have you ever considered the amount of work it takes to immigrate to Canada? Applying to immigrate is a form of labour: it requires time, effort, intention, skill and money. This film about immigration application work tells the stories of Martha, Winnie and Stella. As prospective immigrants to Canada, they are tagged as being “abnormal” (to use the state’s term) through the immigration medical examination and therefore face higher barriers and discrimination during the immigration process.
Themes include the criminalization of HIV, and a critical look at the idea of “good immigrants.”

Kellys (Spain) by Javier Fesser
In this high quality short, we glimpse a private conversation between two long-time hotel workers and close friends. But there are always things that are hidden, even from your best friend.
Subtitled in ENGLISH